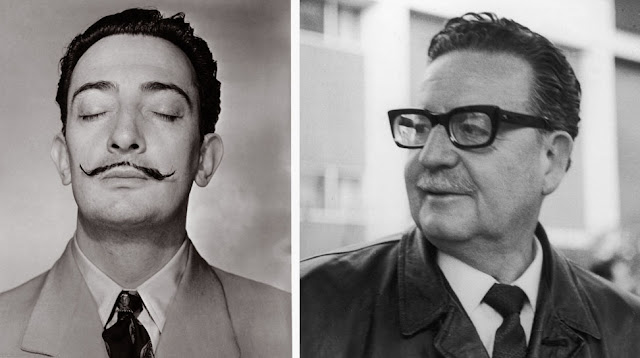 Salvador is a relative newcomer to my list, but it's fast becoming one of my top middle name contenders. It bridges the naming gap between light and strong, carrying with it deep historical and political roots, and balancing a heavy religious meaning with a soft, unusual sound.

Salvador is from the Late Latin name Salvator, which means "saviour." Since the 1920s, it has been a steady presence in the US top 1,000, hovering around the 300-400 mark. It's currently on a bit of a downturn, resting at #459. Its relatively constant level of popularity combined with its familiarity as a word (and a country) means that while a little Salvador won't be one of multiples in his class, his name most likely won't get strange looks, either.

I like its two most famous associations — surrealist painter Salvador Dalí, and the first democratically elected Marxist president in Latin America, Salvador Allende of Chile (his three daughters have a lovely sibling set — Beatriz, Carmen Paz, and Isabel). Guitarist Carlos Santana has a son named Salvador, and so do Canadian musicians Raine Maida and Chantal Kreviazuk (they have three sons, Rowan, Lucca and Salvador).

Italian form Salvatore is appealing though it lacks the "-or" ending that I'm drawn to. In Spanish, a nickname for Salvador is Chava, but I like good old-fashioned throwback Sal.


A few people have brought up the idea that it might be a little odd to use a name from a culture you're not a part of. I think, for most, this is a personal decision. As a name lover, I would never dream of limiting myself that way. My favorite names come from all over the world, and I love the idea of using Salvador with my husband's surname, which is Japanese. That's when things start to get really interesting in the name universe.


What do you think — are you drawn to names from a certain country or ethnic group, and would you consider using one for your own child? Or do you think it's somehow wrong or insensitive?
at 1:51 PM